Part 1: Sorting out “stress” vs. “depression” in difficult life circumstances. 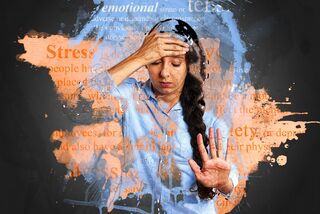 During COVID-19, many are struggling with maintaining their mental health and are wondering how to keep it together. Jennifer King Lindley recently reached out for an interview about these issues for her article, “Everyone is on Antidepressants Right Now. Is That OK?” This is Part 1 of our interview, with some edits (stay tuned for Part 2).

It seems like more and more people are feeling anxious and distressed during COVID-19. How can we distinguish between “normal” stress and mental illness?

In psychiatry, there’s a big difference between “symptoms”—like “anxiety” and “depression”—and “disorders,” which are “syndromes” defined by enduring symptoms that occur together. We all know what it feels like to be anxious or have a transiently depressed mood. But the number of us who have experience with recurrent panic disorder, for example, or major depressive disorder (with not only a sustained depressed mood, but other symptoms like insomnia, guilt, lack of energy, inability to enjoy activities), is much less than those who have only experienced brief, isolated, or intermittent symptoms.

On a related note, psychiatry has long grappled with how to define symptoms, or syndromes, that seemingly occur in response to life stressors. In general, the “disorder” in “psychiatric disorder” suggests a dysfunctional state, not a normal response to a life stressor.

In the old days, for example, depression was divided into “reactive” and “endogenous subtypes.” The former occurred due to a known stressor and might be best treated with psychotherapy, whereas the latter occurred “out of the blue,” and was ideally treated with antidepressant medications. Or so the thinking went. Later, that distinction was abandoned because it’s often impossible to confidently attribute the causality of a depressive episode to a particular stressor and also because the treatment assumptions were faulty—both reactive and endogenous depressions can respond to psychotherapy, or medications, and are often optimally treated with both. And so, tying a major depressive episode to a stressor is no longer relevant in terms of diagnosis, though certainly that might be an important focus in psychotherapy.

Instead, the current Diagnostic and Statistical Manual of Mental Disorders (DSM-5) now has another category called “adjustment disorder” that by definition occurs in response to a stressor, but is “out of proportion” to it, though that’s a subjective call. Adjustment disorder might consist of a depressed mood, or anxiety, but doesn’t include other symptoms of major depression or an anxiety disorder. In terms of stressor-related conditions, we also have “post-traumatic stress disorder” (PTSD), which is considered an anxiety disorder caused by a very serious stressor involving threat of death, serious injury, or sexual violence. Interestingly, events like 9/11 taught us that there may not be a “normal” response to stressors of this magnitude or that understandable responses depend on individual factors like exposure to previous trauma or resilience.

And so, despite what’s sometimes thought or claimed, psychiatric disorders don’t really represent the “medicalization” or “normal” anxiety or depressed mood in response to a stressor.

It seems like many of the symptoms of depression–like eating more, sleeping more, hopelessness, lack of pleasure, and isolation–is how many of us are living now by default. Doesn’t that make diagnosis extra confusing?

Ever since a major revision that started in the 1980s, the DSM has used “symptom criteria” to make clinical diagnosis easier, removing some of the subjectivity that was in previous editions. But it’s not a self-diagnosis manual—the skill and experience of a professional are often essential to collaboratively identify when a disorder is a disorder, as well as when a symptom is a symptom. So, for example, lack of concentration isn’t just having difficulty focusing when we’re multitasking. And “anhedonia”—the inability to enjoy things that were previously enjoyable like hanging out with friends or exercising—isn’t the same as being unable to see friends or go to the gym because of the COVID-19 lockdown.

So how should we be feeling right now? What is “normal” under these circumstances? How can you tell if you need help?

That’s where subjectivity, individual variance, and clinical judgment all come into play. How we “should” be feeling depends on who we are and what’s happening to us—there’s a wide range of what’s happening to people during the pandemic. Some have lost loved ones to COVID-19. Others have lost their jobs. Social distancing has made our lives challenging in so many different ways, ranging from mere inconvenience and boredom; to not being able to have vital social interactions necessary to find love, grieve, or stay sober; to being subjected to domestic violence.

Beyond whether how we’re feeling is “normal,” the threshold to diagnosis a psychiatric disorder is really defined by serious distress and/or functional impairment. Most of us can tell when we’re not doing well. In many cases, we don’t reach out for help often enough, are told that we should just “suck it up” or “exercise,” or we tell ourselves that “it” is normal or will pass. When we do reach out for professional help, we should be able to talk with our psychiatrists or other mental health providers to decide what’s needed, with interventions that range from reassurance or watchful waiting, psychotherapy, or medication.